An exit device (also known as a panic bar, crash bar, panic device, or a push bar) is a form of lever tumbler lock for unlocking a door during emergency conditions. The mechanism consists of a spring-loaded metal bar fixed horizontally to the inside of an outward-opening door. When the lever is either pushed or depressed, it activates a mechanism which unlatches the door allowing occupants to leave quickly from the building. Building codes (or regulations) which require all public buildings have a minimum number of fire and emergency exits. 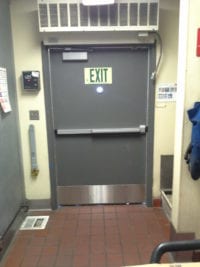 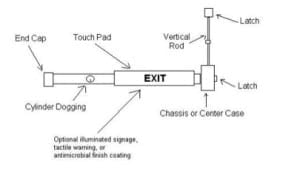 There are three situations in which exit devices should always be used. These include:

The Different Types of Exit Devises

Rim-style exit devices are a great choice for small businesses in densely-packed areas (i.e. business parks, malls and strip malls.) They are cost efficient and comply with most building codes.

A Mortise-style exit device is an excellent choice for medium to large-size businesses and buildings. The mortise design adds extra security and are less prone to tampering. 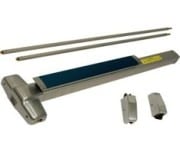 The Surface/Concealed exit device is the perfect choice for large businesses, especially where extra security as well as aesthetics are crucial.

Call Our Offices to Find Out More

Things to Consider when Choosing an Exit Devise

Let Priority Doors help you with all of your door needs.

Your satisfaction is our #1 Priority!

Priority Doors is here to help you with your commercial doors.