Lock Sets not only keep your establishment secure but also serve a valuable purpose. 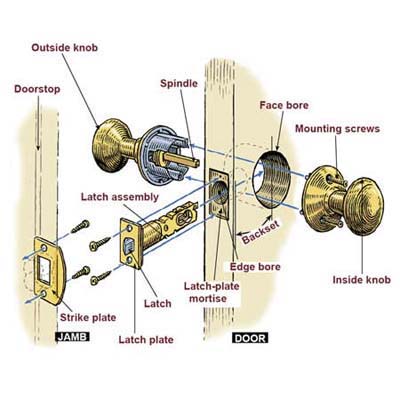 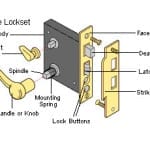 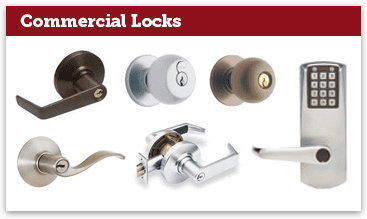 Cylindrical Locksets are by far the most popular. There are two types, lever locks or knob locks.

Mortise Locksets provides the highest security since the lock body is actually located inside of the door.

Call Our Offices to Find Out More

There are many different lock functions for whatever application you require but there are four types that are used most often:

UNCTION: This lock has a key on one side and a push button on the other. When the button is depressed, it can only be unlocked from the outside with a key. Turning the handle on the inside will make the button pop out which unlocks the door until either the button is depressed again or it is locked from the outside with a key. This is mostly used on doors that require some type of security such as exterior and office doors.

STOREROOM FUNCTION: This lock has a key on one side and a blank handle on the other side (no key or button). It remains

locked all the time from the outside (key side) and requires the key to open it every time you open the door. It is always unlocked from the inside. This is mostly used on storage and utility rooms or a janitor’s closet.

PRIVACY LOCK: This lock has a push button on one side and an emergency release on the other side. It is made so that it can be locked from the inside but can be opened from the outside with a tool (usually a coin or screwdriver will do) in case of an emergency. This is mostly used on bathrooms.

PASSAGE FUNCTION: This has no key or push button on either side. It consists of two blank handles. Both sides are always unlocked. This is sometimes used on stairwell doors or any other doors where all you require is to have the door latch behind you but not lock so that it can be opened at all times.

Let Priority Doors help you with all of your door needs.

Your satisfaction is our #1 Priority!

The difference is whether or not the lock requires power to activate it or to release it. Fail-safe is when the door unlocks when the power fails. Therefore power is required to keep the door locked. The opposite is true of fail-secure. Fail-secure is when the door is secure and cannot be opened when power is removed or disconnected. This means that power must be applied in order to operate the lock.

Priority Doors is here to help you with your commercial doors.